Recipe:
1. Wash and peel the potatoes and then cut them into cubes of roughly similar size. Don’t worry about being too particular about the size as they break down anyway.
2. Place the potato cubes into a large pot and add the water. Place on med/high heat and bring to a boil. Let boil ten minutes then add the milk, hing, oregano, pepper and salt and bring back to boil.
3. Cook until the potatoes are soft and falling apart a little. Remove the pot from heat and use a potato masher or stick blender to mash the potatoes. Don’t over mash the potatoes though. It’s good if some biggish chunks are left.
4. Return the pot to the heat (add the corn if using). Let cook a while longer, 10 minutes or so, and then turn off the heat.
Variation: add a cup of corn kernels (fresh or frozen) for potato corn soup.
.....
Fresh Cranberry Relish:

Recipe:
1. Grate tangerine rind, and place in a food processor. Juice the tangerine (be careful of the seeds!) and place juice and pulp in the bowl of the food processor. *Many recipes for this relish call for a whole navel orange, but if they are not available then we can use a tangerine as well. I’m sure there are endless possibilities using any type of sweet citrus.
2. Add cranberries, sugar, ginger (if using), and salt into processor; process until coarsely chopped. The sugar quantity can be tricky because it will vary based on how sweet or tart your cranberries are. Or you could try using ½ cup of brown sugar instead of ¾ cup of white sugar. The molasses will bring a sweetness and richness to the relish.
3. Cover and refrigerate at least one day, or up to three days. This helps marry the flavors. Serve chilled or room temperature.
Cook's note: If you a smaller food processor then you may need to grind the berries in batches. If you do this, it’s important to really mix it up well before you refrigerate it so the citrus and the ginger get evenly spread throughout.
.....
Sago Kichadi:


Recipe:
Wash the Sago and soak it overnight(for best results) or for atleast 2-3 hours. After the sago has doubled in size and softened, mix chilly ginger paste, lemon juice, sugar, salt, peanuts to the Sago. Stirfry the Veges in some ghee and keep them aside once done (don’t overcook them). Take a fry pan add ghee. Keep slow flame always. Add Cumin seeds and after they are brown add the sago mixture and sauté for some time constantly mixing delicately on slow flame for about 10 minutes. Finally add the veges and garnish with Coconut and coriander. Always serve hot.
.....
Salad: 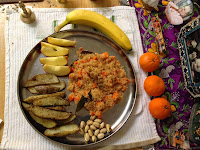 .....
List of no beans and no grains flour that can be used in ekadasi preparations by Kurma Rupa Das:

Amaranth flour: Milled from the seeds of the amaranth plant, this flour boasts a higher percentage of protein than most other grains, and has more fibre than wheat and rice. It is also higher in the amino acid lysine, which some food scientists believe makes it a more complete protein than flour made from other grains. Amaranth flour can be used in cookies, crackers, baking mixes, and cereals.
Arrowroot flour: The rootstalks of a tropical plant are the source of this flour, often used as a thickener for sauces and desserts; the finely powdered arrowroot turns completely clear when dissolved (giving gloss to sauces), and adds no starchy flavor. Because of its easy digestibility, it is also an used as an ingredient in cookies intended for infants and young children. I use it as a grain-free substitute to corn flour (cornstarch for all US readers).
Buckwheat flour: A common ingredient in pancake mixes, buckwheat flour is also used to make Japanese soba noodles. It is available in light, medium, and dark varieties (the dark flour boasts the strongest flavor), depending on the kind of buckwheat it is milled from. You can make your own buckwheat flour by processing whole white buckwheat groats in a blender or food processor.
Chestnut flour: This tan flour is made from chestnuts, the meaty, lowfat nuts that are often served as a vegetable. The flour is a little sweet and is traditionally used in Italian holiday desserts. Italian shops sell it.
Potato flour (potato starch): Steamed potatoes are dried and then ground to a powder to make this gluten-free flour, which is commonly used in baked goods for Jewish Passover (when wheat flour may not be used).
Quinoa flour: Higher in fat than wheat flour, quinoa flour makes baked goods more moist. You can make your own quinoa flour by processing whole quinoa in a blender; stop before the flour is too fine - it should be slightly coarse, like cornmeal.
Tapioca flour: Milled from the dried starch of the cassava root, this flour thickens when heated with water and is often used to give body to puddings, fruit pie fillings, and soups. It can also be used in baking.
Water-chestnut flour (water-chestnut powder): This Asian ingredient is a fine, powdery starch that is used to thicken sauces (it can be substituted for cornstarch) and to coat foods before frying to give them a delicate, crisp coating.
Ragigara (or Ragigaro or rajgira) flour: Very small - is a very small tiny seeds like yellow mustard seeds but much smaller. The seeds can be used to make popcorn and these popped seeds are used to make khir with milk and sugar. The flour is used to make halavah which turns out to be a brown and sticker than regular halavah. The flour is used to make vada, parathas, puris, rotis and small pakoras with mashed potatoes using herbs, ground black pepper and salt added. (note from Kurma: this is amaranth, as described in my list above.)
Singado flour. Pakoras are made using ground peanuts and mashed potatoes, little baking powder, salt and coriander leaves and ground black pepper. (note from Kurma: this is another name for Water Chestnut flour, as described above.)


Cassava grits and flour: (very starchy but sweet tasting roots). Boil the grits with 2 to 3 times the water. It turns into mashed potato consistency and any chopped vegetables can be added. These can also be used to make halavah and base for the Ekadasi Pizza. Boiled Cassava makes excellent subji with lots of fresh tomatoes. Boiled - sliced (one inch thick sticks) - Fried sticks sprinkled with black pepper and salt and a little lemon, make amazing chips that far surpass potato chips. Hope this helps. Gandhari Dasi"